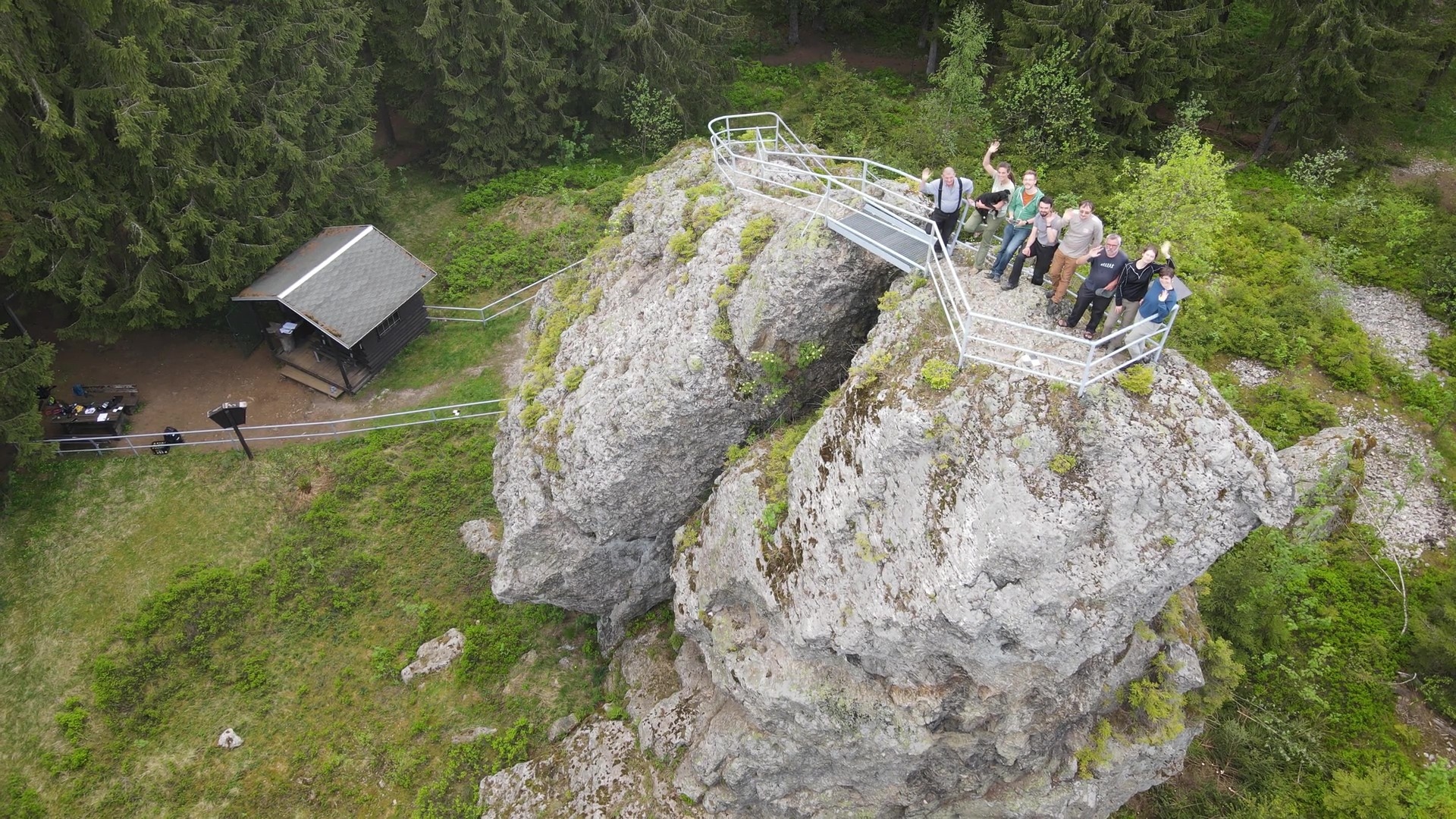 The Schneckenstein is a well-known topaz rich outcrop located in the identically named district of the town of Muldenhammer in Saxony. The outcrop rises 23 metres above the ground in a mostly flat surrounding. With a height of 883 metres above mean sea level, the Schneckenstein is one of the highest points in the Upper Vogtland area. The Schneckenstein and the topaz cabinet located at the mineral center (Vogtländisch-Böhmisches Mineralienzentrum) are the unique features of Topaswelt Schneckenstein. The rock is part of the hiking trail Felsenweg 4 and one of the most famous geosites of Vogtland Geopark. For protection purposes, the rock itself and its surroundings are fenced and can be visited during opening hours.

On the 5th November 1938, the Schneckenstein was named a natural monument and added to the Saxon geosite list as number 259. On the 8th ofAugust 2019 the outcrop was also awarded as “National Geosite”.

Alongside the geological significance, the Schneckenstein has an important meaning for cultural, art, montane and scientific history, which are topic of current research. The Schneckenstein is part of a joint geological research project of Topaswelt Schneckenstein, TU Bergakademie Freiberg and the Vogtland Geoumweltpark.

The Schneckenstein geosite is geologically located in the western exocontact area of the Eibenstock granite massif (intrusion about 320 to 315 Mio. years BP) within contact memorphically modified phyllites (educt’s age: Ordovician) and was already described by Charpentier (1778) and Werner (1787) as petrographic speciality. The rock, measuring circa 23 metres in height, is the erosion rest of a chimney-shaped quartz topaz (tourmaline) contact slate breccia. It is interpreted as an explosion breccia (see Seifert, 2008 and other references) that includes topazes that particularly are of gemstone quality and whose state of preservation is presumably unique on a global scale.

The magmatic development of the Late Variscan granite / microgranite / rhyolite / explosion breccias association and the associated tin and tungsten mineralisations show temporal relations to lamprophyric hypabyssal rocks (Seifert, 2008). Currently, the temporal and substance-based relation of the Late Variscan magmatic development is subject of ongoing mineralogical and geochemical research and of age dating.

The first documented evidence of the Schneckenstein outcop dates back to the year 1535. According to prior mining activities in its close surroundings and the prominent location it is presumed the rock was known by the people much earlier. The beginning of the topaze-mining at the geosite dates back to 1727. From 1728, the processing of Schneckenstein topazes was limited to lapidarists from Dresden. Under the reign of August III (*1696, † 1763, August the Strong’s son, Elector of Saxony, Gand Duke of Lithuania and King of Poland), the Königskrone mine was established – with the goal to mine the Schneckenstein outcrop. The hereditary survey and the 1744 description by J.G. Kern were revolutionary as they were never before applied to a gemstone deposit in Saxony. This process is an act by the mining court to declare a mining area’s property situation. The mined topazes were only used by the Saxon Electorate. Many of the so called “Saxon diamonds” are kept in the Green Vault museum in Dresden or have been gifted to several European noble houses. The English royal house has received 485 topazes. In the spring of 1797, the mining at Schneckenstein was terminated.

The topazes and the Schneckenstein outcrop were and still are important geological and mineralogical reference and research objects. Already in 1737, J. Henckel, counsellor of mines, drew gemstone’s crystalline structure. His reference objects were Schneckenstein topazes. In 1744, mineralogist J.G. Kern described the gemstone outcrop in his work “Vom Schneckenstein oder dem sächsischen Topasfelsen“ (About the Schneckenstein or the Saxon topaz rock). This was one of the first complete and profound descriptions of a gemstone deposit in history.

In 1778, Willhelm von Charpentier published the book „Mineralogische Geographie der Chursächsischen Lande“ (Mineralogical Geography of the Electoral Saxon lands) in which he also described the Schneckenstein outcrop. In the book’s prologue, the author offered a small collection of topazes for sale. In July 1780, famous German author J.W. Goethe evidently ordered 100 to 120 pieces for the price of 12 thaler. Only 94 pieces arrived at Goethe’s residence in Weimar in January 1781. Goethe visited the city of Schneeberg in 1786 and a short time later, Charpentier sent another collection of around 100 topaz specimens to Weimar. It is unclear if Goethe ever visited the Schneckenstein.

In 1820, the Freiberg mineralogy professor Carl Friedrich Mohs used the topazes from Schneckenstein for the development of his new scale of hardness. These Saxon topazes became the reference material for Mohs’ hardness grade 8. The Schneckenstein geosite remains an important research site since its first mention.

Since the early 19th century, the Schneckenstein outcrop is a popular destination for hikers and travellers. As remain from the time of German Romanticism there is an inscription to be found at the Schneckenstein outcrop. Prince Friedrich August of Saxony visited the site on the 6th of July 1829 as a part of his journey along meaningful geological and mining sites in Saxony. For easier access there were stairs cut into the rock and a railing was mounted. The Schneckenstein sill impresses its visitors from near and far.

The tale of the Schneckenstein

With the kind permission of the folklore troupe of the Zwota local history society. 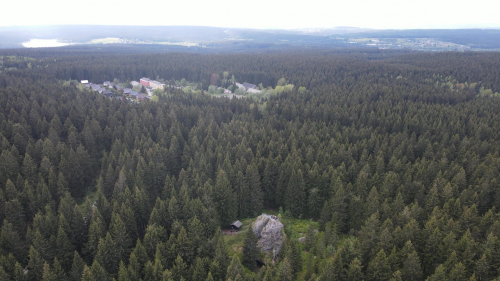 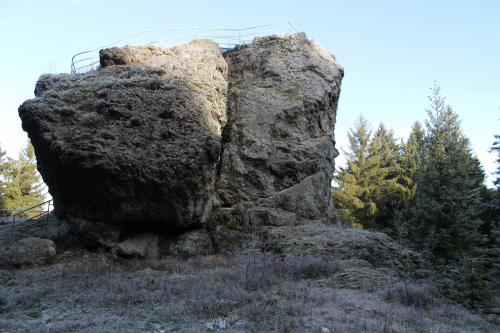 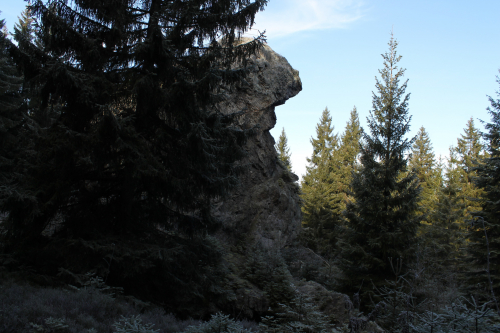 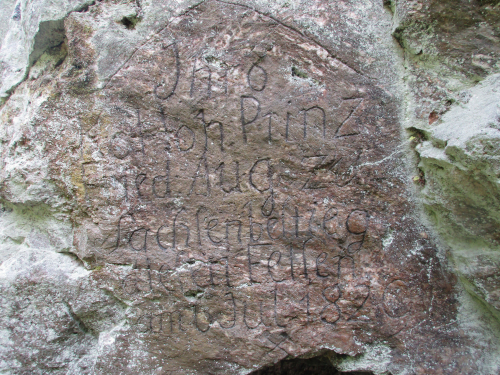 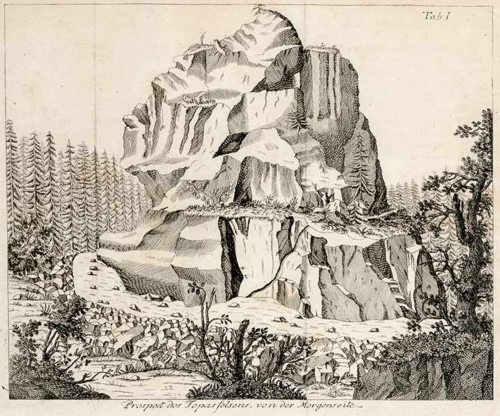 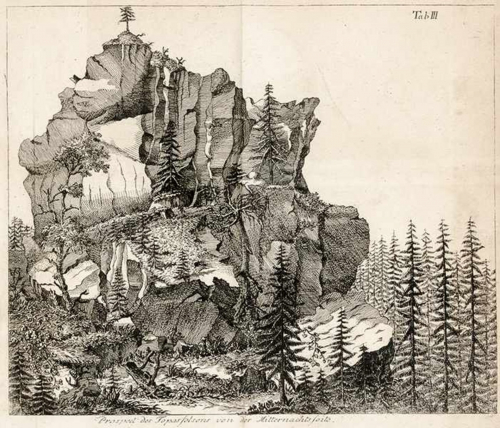 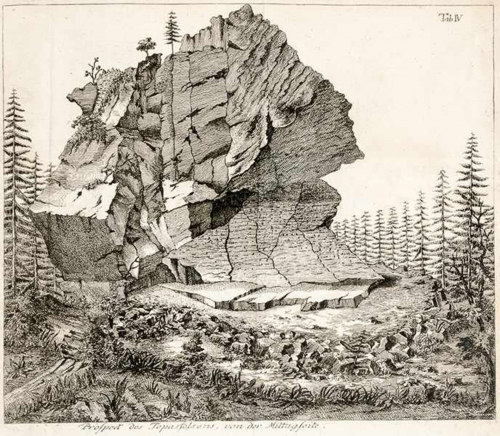 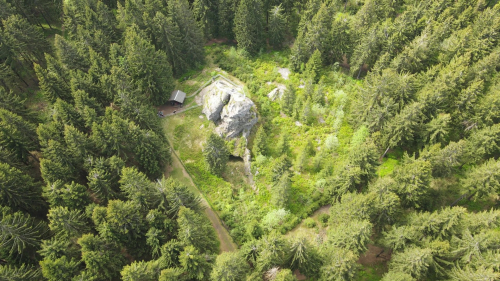 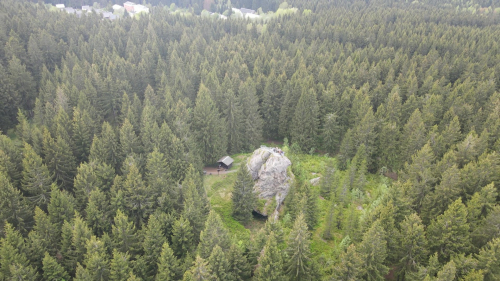 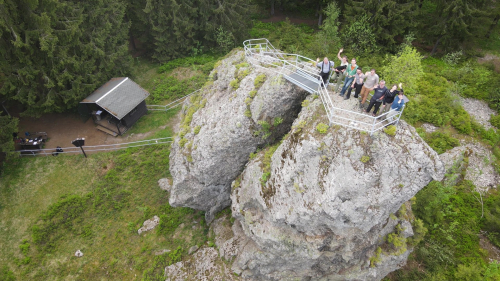 Seifert, T. (2008): Metallogeny and petrogenesis of lamprophyres in the Mid-European Variscides: Post-collisional magmatism and its relationship to late-variscan ore forming processes in the Erzgebirge (Bohemian Massif). IOS press.

About 25 km southwest of Braunschweig, the 200 m high Heeseberg rises above the northern Harz foreland. It lies in the southeastern extension of the Asse and belongs geologically to the Asse-Heeseberg structure, a narrow, elongated fold anticline that contains a salt dome in its center (Fig. 1). In the former Asse salt mine, the salts of the Zechstein were mined for many years. Today it is known nationwide for the storage of low-level radioactive waste that has taken place since the 1970s. … END_OF_DOCUMENT_TOKEN_TO_BE_REPLACED