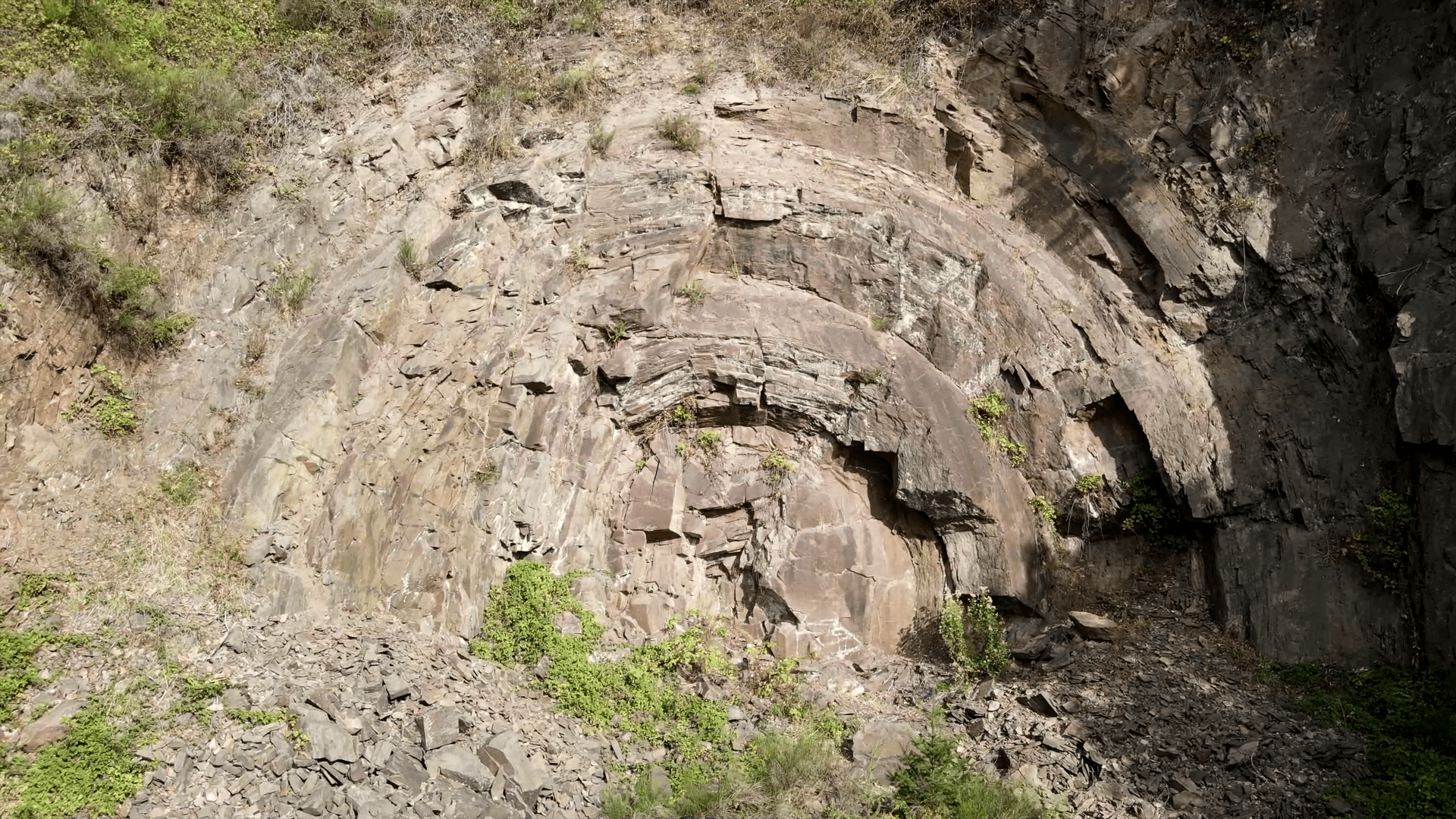 Near the village of Freisen in the far northeast of Saarland, a spherical rock structure of volcanic origin can be found in the former Hellerberg quarry: the so-called andesite rose.

Volcanism in the Saar-Nahe Basin

The Hellerberg quarry, and thus the andesite rose, lies in the Saar-Nahe Basin (SNB), a Late Variscan intermontane basin overlying the former island arc of the Central German crystalline sill.

When the strongly uplifted Variscan mountains disintegrated into individual blocks, synsedimentary “Rotliegend basins” were formed. Within the mountains and in their forelands, fault-related vertical displacements occurred in the Early Permian. These divided the topography of the landscape into mountain ranges and basins wherein erosional debris was deposited. The Saar-Nahe basin contains sediments with a total thickness of about 6500 m and underwent a phase of intense volcanism 296 to 293 Ma ago. Magmas could ascend along faults, and earthquakes probably also occurred. Today, this volcanic phase in the Saar-Nahe Basin is substantiated by the occurrence of intrusions, lava flows and pyroclastic deposits. The composition of these deposits ranges from basalts to andesites to rhyolites and trachytes. (von Seckendorff et al., 2004)

Stratigraphically, the volcanic rocks formed within the Permo-Carboniferous Saar-Nahe Basin (SNB) fall between the Upper Carboniferous-Pre-Volcanic and Lower Permian-Post-Volcanic sedimentary sequences. In the past, this period was assumed to be the boundary between Lower and Upper Permian, and hence these deposits were referred to as boundary deposits. In terms of dating, the volcanites can be assigned to the Carboniferous-Permian boundary. Therefore, today the volcanites are rather considered as basal profile part of the Rotliegend. (Werner et al., 2003)

Effusive volcanites are mainly distributed in two main depressions: the Prims syncline between Sötern and Schmelz-Außen (about 150 m in thickness) and the Nahe syncline in the Freisen-Namborn area (thicknesses up to more than 500 m). The andesite rose is also located in the latter. There, the sequence is rarely interbedded with sedimentary and pyroclastic deposits. Frost (1986) subdivided the volcanic rocks at Freisen into four units, each of which reaches a total thickness of between 90 and 150 m. These in turn consist of several lava flows. Locally, the volcanic deposits and sedimentary rocks are summarised as Donnerberg Fm, which correspond to a phase of SNB volcanism (Schneider & Jung, 1991).

Andesite is one of the many volcanic rocks in the Saar-Nahe basin. However, it is not only found there, but also in other parts of Germany and of course the world. The name is derived from the Andes in South America, where this rock occurs frequently. It was named after Leopold Freiherr von Buch (1774-1853), who first described the rock in 1836. Most andesite deposits in Germany are found in the Rotliegend, the lower Permian stage, i.e. a period from about 300 to 280 Ma before today. Such deposits can be found in the Thuringian Forest, in Saxony and in the Saar-Nahe Basin, among others. Besides andesite, other volcanic rocks can be found there, which can be distinguished by their silica content (SiO2). Basalt, with less than 52% SiO2, is at the basic end of the spectrum, while rhyolite, with over 69% SiO2, is at the acidic end. Andesite, on the other hand, with its 57%-63% SiO2, belongs to the intermediate volcanic rocks. (Lapp et al., 2021)

Andesite can be dark grey to green-grey and has a porphyritic structure defined by large crystals of feldspar, hornblende or pyroxene in a fine crystalline groundmass (Best, 2009). Since andesite is particularly hard and resistant, it is used as gravel in road construction and for concrete production.

The Andesite rose at the Hellerberg

In the construction of the A62 motorway near Freisen, the volcanic rocks of the Hellerberg were quarried as gravel in the early 1970s. These volcanites are the result of nine to twelve effusive lava flows, three of which are exposed in the quarry. (Werner et al., 2003)

The highlight of the quarry is an approximately 15 m high and wide, slightly elliptical rock formation: the so-called andesite rose. It shows a shell-like concentric structure – a strange phenomenon. This can actually be seen in other outcrops in the region, especially in the areas that were cut for the construction of the A62 motorway. The shell-like structure was discovered there to be only a shallow phenomenon. (Werner et al. 2003)

Various approaches to the origin of these onion-shell-like rock formations are discussed. Müller & Mihm (1971) interpreted these structures as shallow, secondary intrusions into the already cooled lava flows. According to this, the formation would be the result of cooling fissures. This approach is based on the strongly porphyritic structure compared to the surrounding blistered amygdules. Geochemically and mineralogically, however, both rocks are identical (Werner et al., 2003).

However, the amygdules are not only accessory to the andesite rose: agates, goethite and zeolite druses of unusual size and quality were found in the vesicular voids (Werner et al., 2003).

Another theory for the genesis is a pressure release in magmatic rocks. For example, this is possible when overlying rock masses are removed by erosion and the underlying and previously compressed rock is freed from the load or lateral pressure. The previously compressed rock expands in the direction of the decreasing pressure. Fissures and gaps form, both parallel to the surface and perpendicular to it, setting the basic pattern for the shell-like appearance. The formation of stress cracks already occurred during the cooling of a lava flow. (Hahl, 2011)

However, it is probably the same for all possible theories that, as is so often the case in nature, various processes superimpose each other. Weathering then also ensures that rock develops a very specific appearance. Granite, for example, weathers into rounded shapes, so-called woolsack weathering and also to crumbling granite-grus. Andesite can show platy segregation, while basalt produces hexagonal columns.

Fig. 3: The Freisen agate hiking trail offers insights into the geology and mineralogy of the region on an approx. 8 km long route. The highlight is the andesite rose.

The andesite rose can be hiked along the Freisen agate trail. In addition, the most beautiful mineral finds from the Hellerberg quarry and the surrounding area can be admired in the Freisen Mineral Museum. 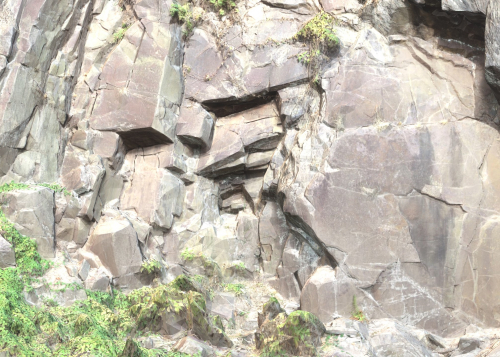 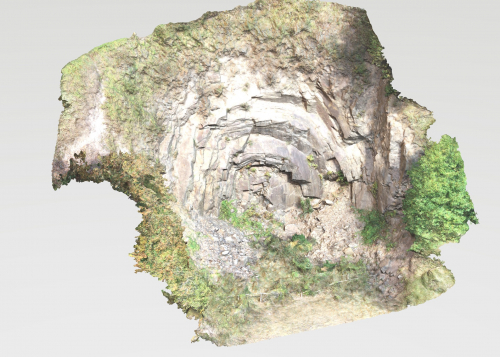 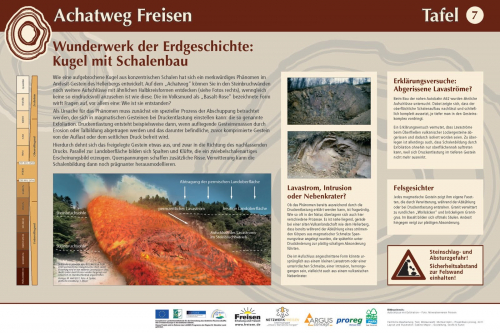 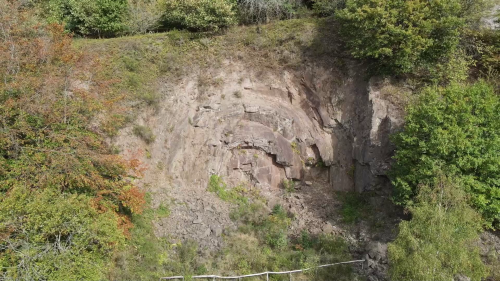 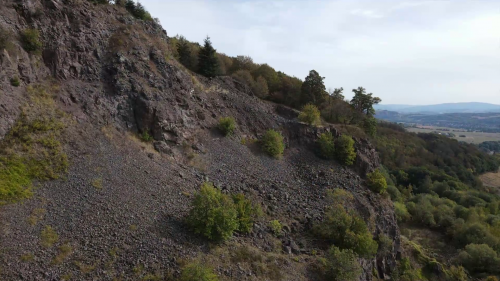 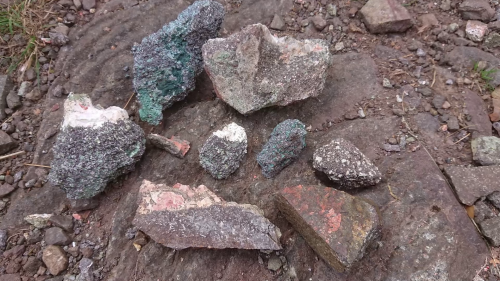 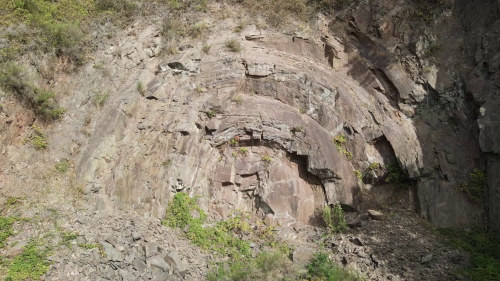 Volcanism in the Saar-Nahe Basin The Hellerberg quarry, and thus the andesite rose, lies in the Saar-Nahe Basin (SNB), a Late Variscan intermontane basin overlying the former island arc of the Central German crystalline sill. When the strongly uplifted Variscan mountains disintegrated into individual blocks, … END_OF_DOCUMENT_TOKEN_TO_BE_REPLACED