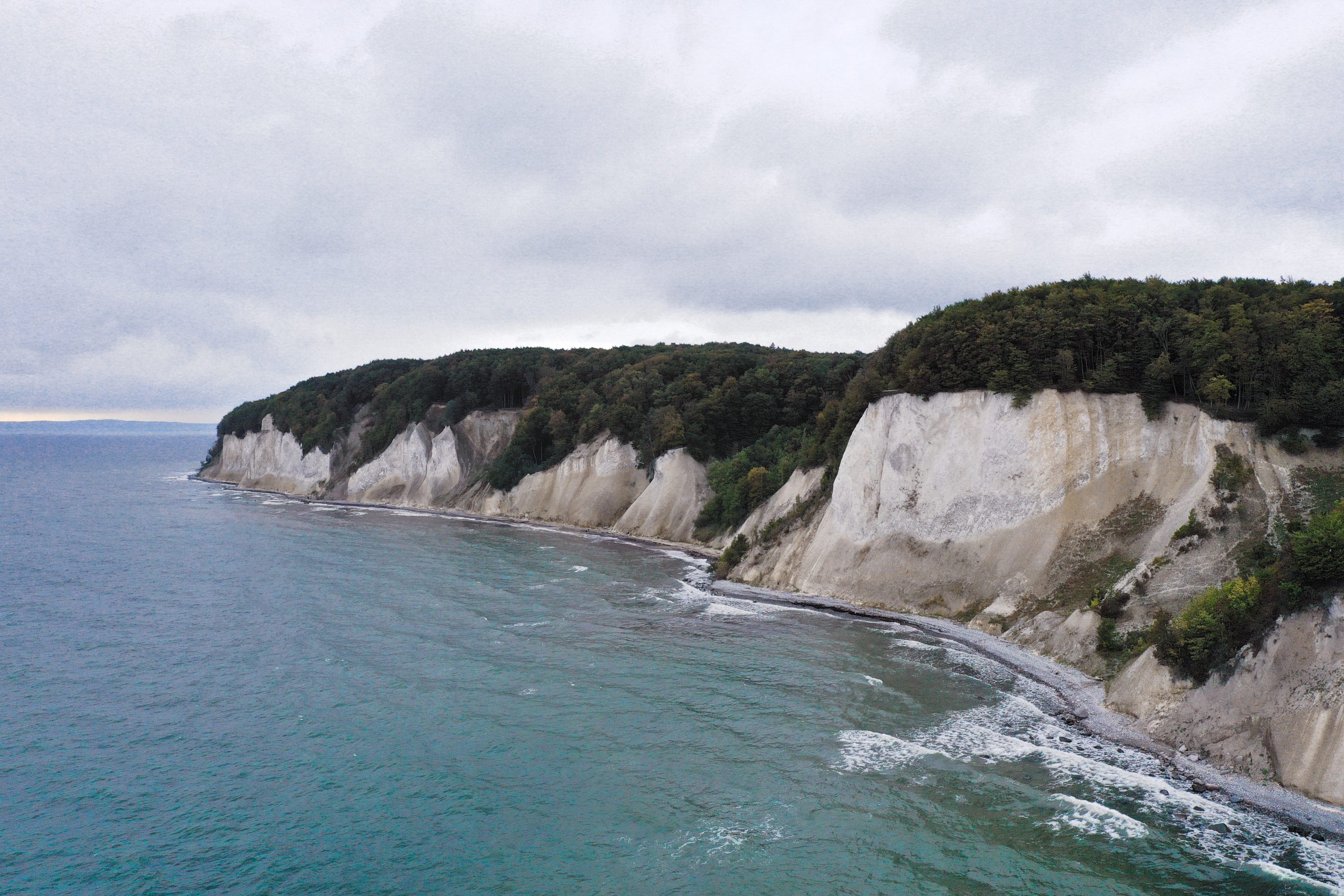 The famous white chalk coast on the Island of Rügen consists of limestone marls from the Cretaceous period. They were formed around 70 million years ago in a cool shallow sea and consist for the most part of microscopic calcite platelets that surrounded unicellular algae (coccoliths). During the last glaciation period, the Cretaceous limestones and the glacial sediments deposited on top of them were pushed and compressed by the moving glaciers and stacked into a sequence of imbrication thrusts.

The Wissower Klinken shown in the 3D model are part of the steep coast of Rügen and have been a major tourist attraction for a long time. However, they have also become a symbol for geohazards at the North German steep sea cliffs. In 2005, the steeply towering Klinken were largely destroyed by a landslide.

The Rügen chalk coast is located in the smallest national park of Germany known as the Jasmund National Park. It was established on September 12, 1990 also due to the dedication of the Alternative Nobel Prize winner (1997) Prof. Michael Succow from Greifswald and his fellow campaigners Hans Dieter Knapp, Lutz Reichhoff, Matthias Freude, and Lebrecht Jeschke. The multifaceted National Park with its impressive chalk coast is a popular tourist attraction. The region has also inspired literature and art – then as now. One of the most famous artworks is the painting “Kreidefelsen auf Rügen” [Chalk Cliff on Rügen] (Fig. 1) by Caspar David Friedrich (1774-1840). The peaks, which Friedrich painted in 1818, are considered to represent a composition of many of his impressions as no part of the steep coast is found in this form today. The Wissower Klinken have become a symbol of the natural instability and potential geohazards of the North German steep coastline. In the year 2005 (GHK 10), Rügen’s chalk coast lost one of its most famous landmarks when it broke off as a landslide. Even though the Wissower Klinken have lost its original peaks, they are still a magnet for visitors and an important object of geoscientific investigations.

The legendary development of the Isle of Rügen

When our Lord God created the world and was almost finished with it, he was standing on the island of Bornholm one evening, just before sunset, and looked across at the Pomeranian coast from here. His large trowel lay in the bucket, but there was only a little bit of earth left in it. When he looked over the water, the coast seemed too bare to him. He took the rest of the earth and threw it from Bornholm over to the coast. About half a mile offshore, the earth fell into the water. Our Lord God ran the trowel along the edges and made it nice and smooth on the outside. In the end, Rügen became just an island like all the others. By now the sun had almost completely set. The Lord God wanted to call it a day. He quickly scraped and scraped up all the leftovers and packed it against the island. This is how Jasmund and Wittow came about. That looked a bit rough and ready, but our Lord God thought: “Now´s time to stop work, so it will be left as it is.“

(modified and translated after Burkhardt, 1957)

The geological development of Rügen in the Cretaceous period

From the viewpoint of geosciences, the chalk coast was not formed by supernatural powers, but rather by the interaction of different geological processes.

The steep coast of the Jasmund Peninsula in the northeast of Rügen is composed of a sequence of sediments containing white lime marls in the lower part. The sequence is of Late Cretaceous age and was deposited in the lower Maastrichtian about 70 million years ago.

In the late Cretaceous, North Germany was covered by a cool shallow sea of up to 200 m depth. There, an abundance of haptophytes contributed to the formation of these thick sedimentary deposits (Fig. 2; Meschede & Warr, 2019). These unicellular algae from the order Coccolithophorida (Fig. 2) surrounded their single-cell bodies with micrometer-sized (1 µ = 1/1000 mm) calcite platelets (coccoliths). When the algae died, the spherical bodies broke up and the coccolith fragments formed the matrix of the fine-grained chalk deposits. The chalk has not been lithified diagenetically and it is so soft that it can be cut by a knife when wet. There are also remnants of larger organisms traceable in the calcareous matrix – such as sea urchins, brachiopods, poriferans, bivalves, belemnites, or ammonites. Furthermore, horizons of flintstones also developed in these lime marls (see also Steinich, 1972). They were formed as nodular features or in layers. The flintstones are composed of SiO2 in the form of cryptocrystalline quartz, the find crystal structure of which is only visible under the microscope at extremely high magnification. Today, the beach along the chalk coast is largely composed of flintstones, since they are more resistant against the surge of the Baltic Sea than the soft limestones, which are ground down and transported away.

The Maastrichtian chalk is overlain by soft Quaternary sediments, which were formed during the last glaciation phases (between 140 000 and 12 000 years before present). At the eastern coast of the Jasmund Peninsula, these deposits form a sequence of at least three tills (M1, M2, M3) and intermediate glacigenic sediments (I1, I2) made up of clay, silt, sand and gravel that are of glacifluvial or glacilimnic origin (Fig. 3).

The chalk deposits and glacial sediments of Jasmund were influenced by another geologically important process – glacitectonism. This involves the deformation of rock sequences caused by glacier movement. During the Weichselian glaciation, the Cretaceous and Quaternary sediments were thrust and folded to form imbricate fans by the advancing glaciers. The entire structure of Jasmund shows a fold and thrust belt at a scale that is markedly smaller than found in orogenic belts (Fig. 4; Gehrmann, 2020). The glacitectonized sequence is unconformably overlain by another till complex (M3) belonging to youngest stage of the Weichselian (Abb. 3). This unit was not affected by the large-scale deformation. Thus, the local glacitectonism occurred in the Pomeranian phase. That is a phase after the Last Glacial Maximum ca. 22 000 to 20 000 years before present, but before the youngest local glacier advance (Mecklenburg phase, ca. 17 000 to 15 000 years before present) of the Wechselian (e.g. Müller & Obst, 2006; Litt et al., 2007; Kenzler et al., 2010; 2015; Börner et al., 2019).

Geological modeling and restoration of cross-sections have revealed the glacitectonics of the Wissower Klinken section to be a controversial zone. The structural history of this section records three glacitectonic deformation phases related to local advances of glacier lobes with different flow patterns (Gehrmann & Harding, 2018, see also models by Groth, 2003 and Ludwig, 2011). The structural anomalies around the Wissower Klinken and the island morphology of Jasmund indicate a first ice push occurred from the northeast, a second from the southeast, and possibly a third one from a more eastern direction.

A high-resolution, scientifically usable model is available at V³Geo. 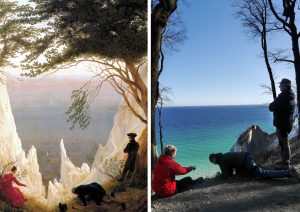 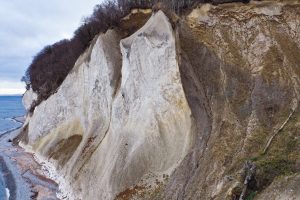 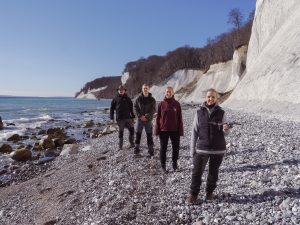 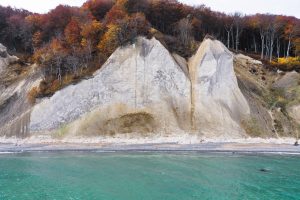 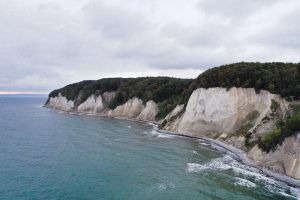 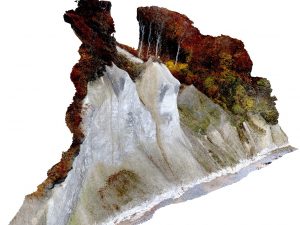 We thank the Nationalparkamt Vorpommern and Dr. Ingolf Stodian (Nationalpark Jasmund) for the good collaboration and for granting the approval to work in the national park.

In the northern Harz foreland between Ballenstedt in the east and Blankenburg in the west, steep, sometimes meter-high sandstone cliffs form an imposing natural phenomenon over a length of approx. 20 km, which is known as the Teufelsmauer. The rugged, erosion-resistant cliffs are formed by layers of silicified sandstone, the formation of which is associated with the uplift of the Harz Mountains and their overthrust to the northern foreland during the Upper Cretaceous. The Königstein, Mittelstein and Papenstein sections south and south-west of Weddersleben have been under nature protection since 1935. In 2006, the Teufelsmauer was awarded national geotope status and is now an important geopoint in the UNESCO Geopark Harz – Braunschweiger Land – Ostfalen. … END_OF_DOCUMENT_TOKEN_TO_BE_REPLACED